How are EHFs used in Tekla Structural Designer and what for?


These are not the same thing and should not be confused.

1. Why is the formula shown in the screenshot below used instead of the code equation 5.2 ?

See below under the title Sway 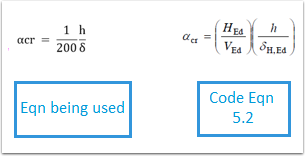 Any convenient set of lateral forces can be used to estimate the lowest elastic critical buckling load factor of a structure.  Whether this is called alpha_crit or lambda_crit or something else, it is essentially the same thing, and the method is a general one of structural theory, not unique to a particular design code. British Standards uses the same forces as those used for imperfections purely because they are already ‘to hand’ as it were, and this removes the necessity to calculate others.   Tekla Structural Designer adopts this method for the Eurocode for the same reasons.

Because the horizontal load used to determine the sway deflections is always 0.5% of the total vertical load and 0.5% = 1/200, thus:

So when looking at sway it ends up as the same formula as BS:

Should the deflections from Wind loads be considered in calculating sway for combinations including Wind?

Consider - if additional lateral loads are included in calculating the sway deflection, then Hed is increased and so is δ in direct proportion.  Hence the value of (HEd/δ ) remains unchanged as do h and Ved  .   Thus, there is zero total effect on the value of αcr.

Furthermore, the ‘original’ EC3 equation - using sway and (Hed/Ved ) calculated from ALL loads in the combination, including horizontal wind AND EHF’s - suffers from the same limitations as applying only EHF’s applied in isolation - i.e. it is no better - when buildings are not orientated in X/Y or the building itself has no clear set of orthogonal axes.  In addition, it suffers from the following additional issues:

Hence and in conclusion; the method discussed above is used in Tekla Structural Designer, since using the more complex code equation is no more ‘correct’, gives no benefit or greater accuracy and has additional drawbacks in the context of more “real-world” structures (in contrast to the very limited and simple structures/ load conditions considered in worked examples).

In Eurocode  - in contrast to BS - practical imperfections are now included in all combinations, i.e. those that include other lateral loads and not just gravity.  Hence a reduction can be applied to these EHFs, when considering imperfections (not sway!), since other lateral load is already acting.  This is controlled via the settings shown in the screenshot below.

This reduction is NOT applied to the EHF’s used in the sway assessment discussed above, as the factor of (1/200) used in the equation would also have to be adsjusted by the same amount, and the effect would in any case cancel out.