To add specialty bolts to the catalog, such as Hilti Kwik bolts follow these steps. 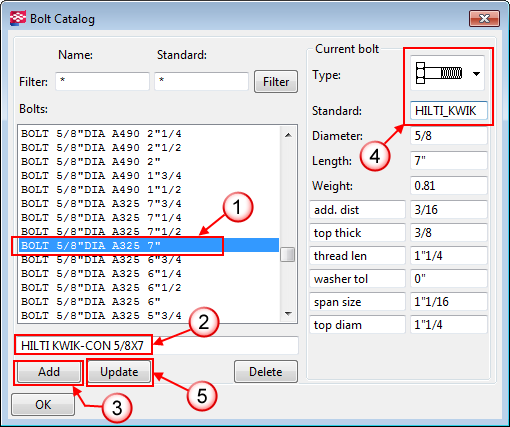 1. To make things easier, find an existing bolt of a similar size to the bolt you want to add. Highlight it to fill in the properties on the right.

2. Enter the new bolt name, it helps if the size in included. What you want to show in the BOM and bolt lists later will reflect this.

4. Next change the properties of the bolt in the right hand side. For a new type of bolt make sure a new bolt standard is defined.

5. Click the Update button when done. Repeat for each diameter and/or length.

Finally, click OK, and save changes to model folder. This creates a screwdb.db file (bolt catalog) that can be saved for future models. 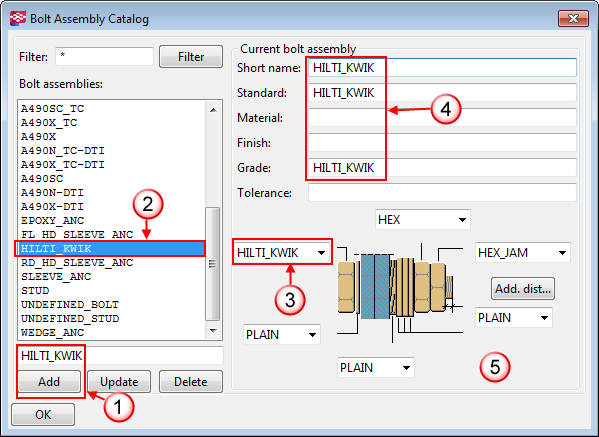 1. Give the Hilti Kwik bolt assembly a name and click Add.

3. Make sure that the new name shows in the drop down at the bolt head in the picture on the right.

4. Change the properties of the bolt assembly in the right hand side. Hit the Update button when done.
• Short name is used in marking and reports. It is usually the commercial name for a specific bolt.
• This is the full name which is shown in the bolt assemblies list in the Bolt Assembly Catalog, and in the Bolt standard list box in the Bolt properties dialog box when invoked from the model.

5. Adjust other values to choose washer and nut types. Even with something like an epoxy anchor, where these are not used, they need to have a value in the Assembly.

Finally, click OK and save changes to model folder. This creates an assdb.db file (bolt assembly catalog) that can be used in future models.

When creating these bolts in the model, make sure to pick the standard you have defined, and the diameter.

Normally, a bolt length is calculated based on the grip (thickness of materials being bolted). For an epoxy or expansion type anchor that does not use the nut and washer, the length must be set in the Cut Length field.

Use a negative number in this field to force the length of the bolt. Note that the length you set must exist in your bolt catalog. 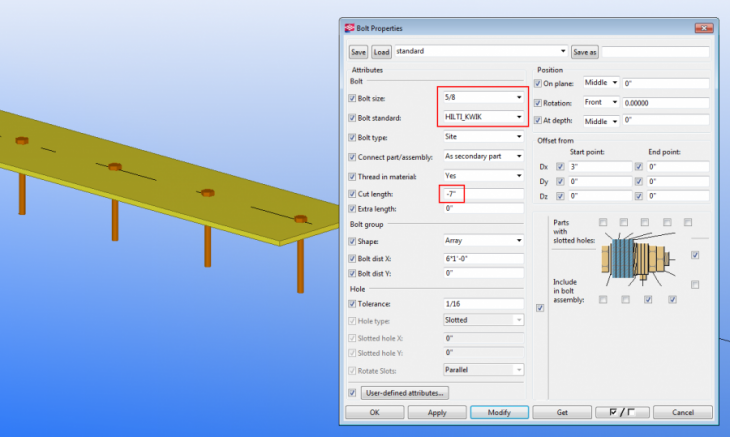