Apart from when slabs are set to be meshed in the analysis, any panel loads applied to slab panels and roof panels have to be decomposed on to supporting members prior to analysis.

In traditional hand calculations a "tributary area" (sometimes called "yield line") loading approach would have been adopted to determine the decomposed loads, but this has limitations when dealing with complex geometry such as:

Also the "tributary area" approach can only approximately handle point, line, and patch loads (by converting them to area loads).

Because of these limitations the "tributary area" method is not used in Tekla Structural Designer - instead a method referred to as FE decomposition is applied instead. This is based on finite element analysis.

The FE decomposition model can be demonstrated using the following two-way slab on beams example. 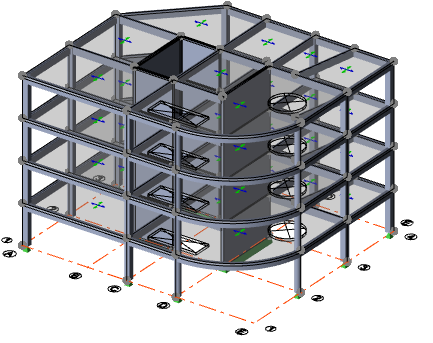 For this type of structure:

• Each FE decomposition model is analysed and the reactions at the rigidly supported nodes are turned back into VDLs along beams and walls, and point loads on columns.

So if the slabs have to be meshed for the FE decomposition during pre-analysis, why not do away with decomposition entirely and just mesh the slabs when performing 3D analysis of the entire model instead?

In the first run of the model below the slabs are left unmeshed, this requires the loads on the two-way slabs to be FE decomposed prior to analysis. The bending moments from the resulting 3D Analysis are as shown, (max hogging -198, max sagging 165): 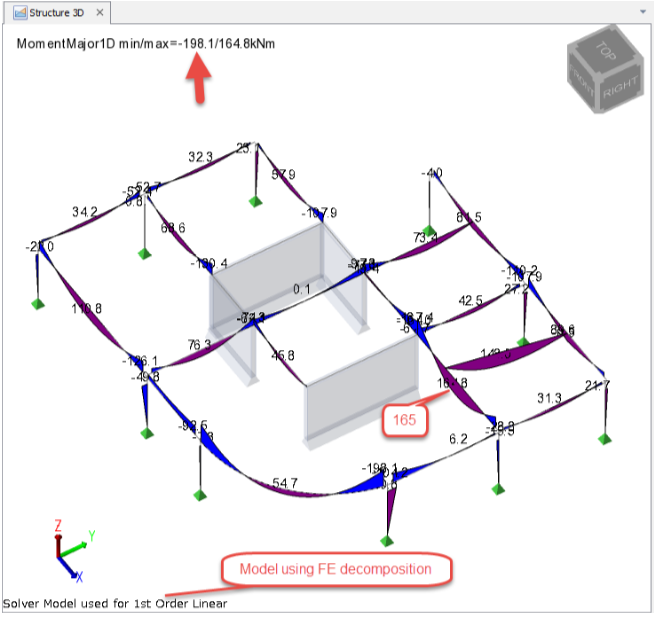 The above results can be compared against a second run of the model in which the 2-way slabs are set to be meshed in the 3D analysis. FE decomposition is no longer required and the bending moments from the resulting 3D Analysis are as shown, (max hogging -89, max sagging 82) 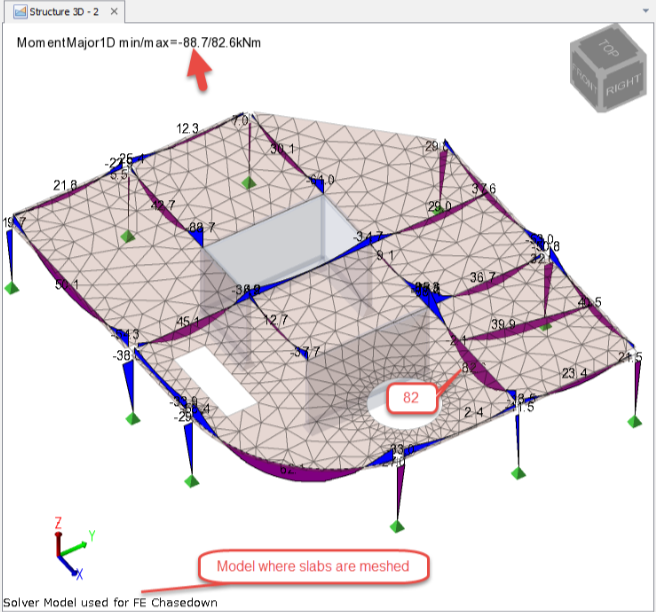 In this second run, because the slabs are included in the 3D analysis model, some of the load is being transferred directly to the supporting columns and walls via the slabs themselves. While this is not wrong, it goes against the engineer's expectation - which would be to design the beams on the basis that they transfer all the load to the supporting members.

As stated in the previous section, the engineer's expectation would be to design the beams on the basis that they transfer all the load to the supporting members. This is achieved in Tekla Structural Designer because (by default), two-way slab are not meshed in the 3D analysis and grillage chasedown solver models.

Note however that by switching on the Mesh 2-way slabs in 3D Analysis level property the engineer can allow some of the load to be transferred directly to the supporting columns and walls via the slabs.

Decomposition rules for the different types of panel and overlapping panels

The way in which Tekla Structural Designer decomposes panel loads depends on how the slabs/panels are modeled and how they are spanning.