To create a rebar assembly:

To modify the rebar assembly structure or to remove objects from it, use the other new commands under Assembly on the Rebar tab: 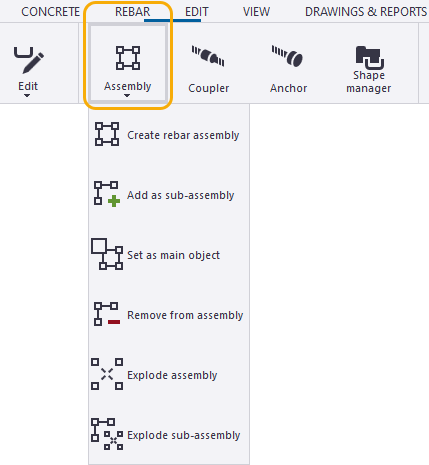 Alternatively, you can use the corresponding commands on the right-click context menu.

To add more objects to the same hierarchy level as the other objects in an existing rebar assembly, use the Assembly > Add to assembly command on the context menu.

If needed, you can also adjust the coordinate system of the selected rebar assembly by using direct modification. Click

Define or remove coordinate system on the contextual toolbar, and then drag these handles: 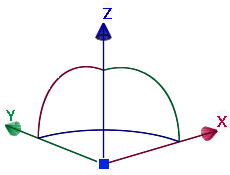 When you work with rebar assemblies, use the same selection switches and the same methods to move in the assembly hierarchy as with other nested assemblies.

You can also number rebar assemblies and add them to pour units in the same way as other assemblies.

Rebar assemblies in reports and filtering

This new feature streamlines the creation of reinforcement cage drawings for cast-in-place structures as well as welded mesh drawings for precast manufacturing, for example.

The Assembly position element is now available in reinforcement mark properties, and associative note properties. It gives the position number of the associated rebar assembly. 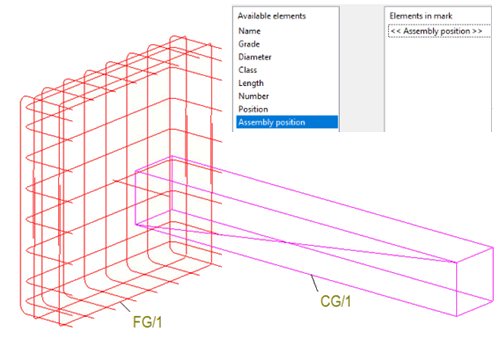 You can use the assembly template attributes ASSEMBLY.HIERARCHY_LEVEL and ASSEMBLY.ASSEMBLY_POS for filtering the drawing view contents. To create filters, in drawing view properties, click Filter in the options tree. Examples:

The following example filter shows the hierarchy level 3 assemblies that have the position number AA/1:

Note that you can also create a drawing view filter by selecting Assembly as Category and Position number as Property and then define the assembly position number as the value. With this filter the view shows assembly AA/1 (including all its sub-assemblies).