Note that setting the XS_USE_SMART_PAN advanced option to TRUE is useful for the Windows GDI only and has no effect on FOG rendering.

Shift+Space is now the default shortcut for the Zoom selected command both in the modeling mode and in the drawing mode.

Note that cut lines that have been manually added in drawings are not removed automatically.

The removal of overlapping cut or non-solid lines is controlled by the XS_ENABLE_OVERLAPPING_CUT_LINE_REMOVAL advanced option. It is by default set to TRUE, and the overlapping cut and non-solid (dashed, dash-and-dot) lines are removed. 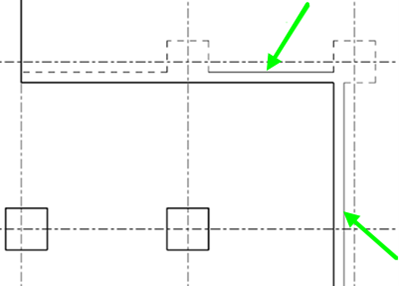 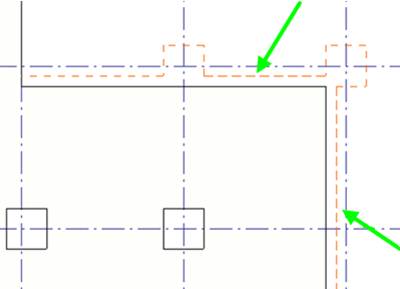 A new user-specific advanced option, XS_VIEW_FRAMES_VISIBLE, has been added in the Drawing views category of the Advanced options dialog box:

You can now open property dialog boxes for drawing objects, such as parts, reinforcement, surface treatment, and grids, through Quick Launch. Type properties in the Quick Launch box

in the drawing mode, and Tekla Structures lists all the property dialog boxes that are available for opening.

The new hatching algorithm correctly handles a much wider range of complex geometries, such as self-intersecting polygons, collinear polygon edges, touching polygon vertex/edge cases and many others.

For details about drawing hatches, see Define hatches in drawings.

The DocumentManagerUDAs*.txt files define the drawing UDAs that are shown in the Document manager columns.

This improvement was already introduced in Tekla Structures 2021 SP1.

Improvement in Select all

The behavior of the Select all command has been changed. Previously, if the number of the currently selected documents was less than the total number of displayed documents, all documents were selected, but if all were already selected, then everything was unselected. This meant that if a single item was visible and the user right-clicked it (at which point it became selected) and then selected Select all from the context menu, the document was actually deselected. That made it impossible for macros to reliably select single items in the document list. This behavior has been changed so that now all visible items are always selected and the toggling behavior is disabled.

Drawing 2D Library now supports grids in details. To include the grids in the selection when you create details, click the Options button and select the new Include grids option.

Support for polygons and polylines with alternating bulges added

Drawing 2D Library now supports polygons and polylines with alternating bulges. Previously, when you created a detail from a polygon or polyline, the main bulge value was set to all the sections in the detail.

For details about 2D Library, see 2D Library in drawings.

Drawing layout (.lay) files whose names are longer than 63 characters are no longer displayed in the Layout list in drawing properties, because Tekla Structures does not allow the use of layout files with names over 63 characters.

There is a new log warning if the requested font in drawings cannot be found, and another font is used instead.