The information on this page is not valid for online licenses.

On-premises licenses are an alternative to the default online licensing method. Whether the license is on-premises or online is determined when you purchase a license, so you cannot switch your licenses between the two distribution methods yourself. You activate on-premises licenses on a license server that you install on your own computer hardware. Tekla Structures installations for one or more users connect to the license server to reserve a license.

With on-premises licensing, Tekla Structures uses FlexNet (FlexNet Publisher License Management) licensing system by Flexera Software. We provide our own Tekla-specific tools for managing the licenses on top of the common FlexNet platform, replacing some of the standard tools you may have encountered when using other software products that use FlexNet for licensing.

Keep backup copies of your license entitlements in a safe place.

Local licensing on your workstation

For organizations with many users, it is not optimal to install and manage a license server on each workstation because of the extra work involved, lack of visibility and inability to flexibly share licenses between users. In this situation, it is better to set up a central license server in your internal network.

The illustration below shows how licensing works in a typical corporate setup where licenses are activated on a centrally-managed license server, and there is a mix of on-premises and online licenses in use.

Tekla Structures holds licenses in trusted storage. This means that Tekla Structures does not support three-server redundancy, where licenses are held in license files. However, you may have any number of license servers, and use search paths for defining and finding them.

You may want to spread your license pool on several servers in your company. You may have offices in many cities, each office with its own license server, or you may simply want to divide the license pool to minimize disruption caused by server downtime.

In Tekla Structures, you can define two server addresses separated by a semicolon (;). This way, if there is a maintenance break on one of the servers, users can obtain the license from the other server. 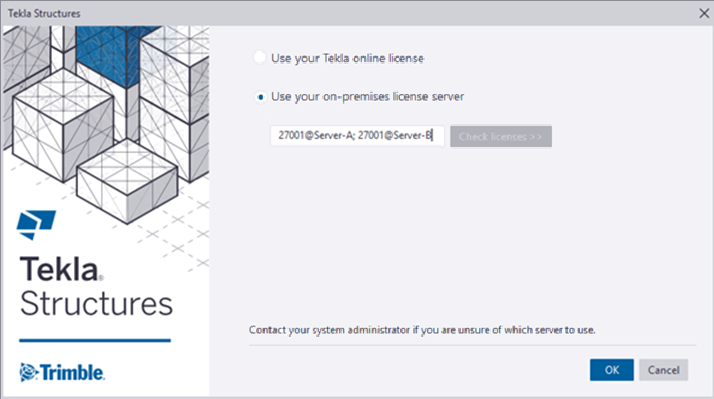 Defining several license servers may slow down the starting of Tekla Structures. Therefore, we do not recommend defining more than two servers.

The Tekla license server does not need high performance hardware. However, it is important to ensure that the network connection and server hardware are reliable, and to maintain the server system carefully.

Deactivate your licenses before you make changes to the hardware or perform a major operating system upgrade on the license server computer. Keep copies of your license entitlement certificate(s) in a safe place in case something goes wrong, so that you can easily and quickly activate the deactivated licenses on a different system. You can only activate the same licenses again if they have first been deactivated on the previous system. If the license server system becomes permanently inoperable with the licenses still activated, contact your local Tekla support for assistance.

You have fine-grained control over the license use:

The configurations can be done based on host addresses, individual user names or by user groups. See Modify on-premises license access rights (tekla.opt) for more information.

There are several prerequisites the administrator needs to take into account before starting with FlexNet licensing. Take a look at the following listings:

In addition to Tekla Structures specific documentation, you can find useful information on the FlexNet system in the documents provided with the installation and in Tekla Downloads. The following FlexNet License Administration Guides by Flexera Software are generic guides that contain, for example, instructions on how to create user groups and manage access rights: