Rounding bar lengths in the model

Previously you could only round reinforcing bar lengths in report and drawing templates using the settings defined in the rebar_config.inp file.

You can define separate settings for straight bars, first and last legs, and intermediate legs, and you can round bar lengths up, down, or to the nearest suitable number according to the rounding accuracy. There is also a separate setting for defining how the bar lengths are rounded up at splitter locations.

You can define tapering step values separately for straight bars, first and last legs, and intermediate legs. Using the rebar set or property modifier properties, you can also define the number of bars in the one tapering step.

You can now create rebar set modifiers for entire rebar sets, or for selected bar groups or bars. Use one of the three reinforcement selection switches

to select the rebar set bars for which you want to create a modifier.

Then use the modifier commands on the new Rebar set contextual tab that appears at the right end of the ribbon. The contextual tab is only visible when you have rebar set bars selected.

The first button on the contextual tab is for defining how to place the modifier in the model and how many points to pick. In addition to the previous single point and multiple points picking modes, a new picking mode

is now available for the selected rebar set bars. Click the Picking mode button to cycle through the three modes.

The following new settings are now available in the Rebar end detail modifier properties in the property pane:

On the Concrete tab on the ribbon, there are now new commands for Rebar display options in the model: 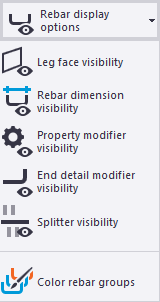 When you modify rebar sets by dragging leg faces , the following new and improved methods are now available: