We would note that the IStructE sheet describes an entire scheme by simple grand totals for each material used, hence it is aimed at a reasonably high level summary of scheme data enabling scheme comparisons - i.e. it is aimed primarily at scheme selection rather than detailed optimization during design development of a selected scheme. It thus compliments the powerful Embodied Carbon assessment tools in Tekla Structural Designer, which do enable efficient detailed optimization during this phase of design development.

In addition to these enhancements, a new Chart view has been added for Embodied Carbon by Material and the Embodied Carbon Factors (ECF) for Westok beams have been revised and updated. The full list of enhancements in this area is as follows with further details for each below:

The new grouping options are listed in the drop-down options list for the “Embodied Carbon Overview” Review Data table, and also have new associated Report items in the Embodied Carbon chapter options, as shown in the pictures below. 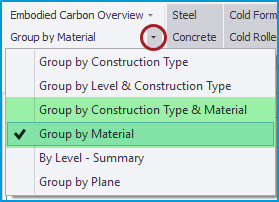 An example of this new table option is shown in the picture below for the simple model shown - a steel structure with steel decking composite slabs and composite and non-composite beams. Note the following:

An example of this new table option is shown in the picture below for the same model. Note the following:

Separated Reporting of Slabs and Mats

In Embodied Carbon Overview summaries the totals for concrete slabs and mat foundation slabs are now separated. An example of this is shown in the picture below. For the IStructE sheet this allows mats to be assigned to a foundations category which in turn enables some automatic allowance for excavated materials. 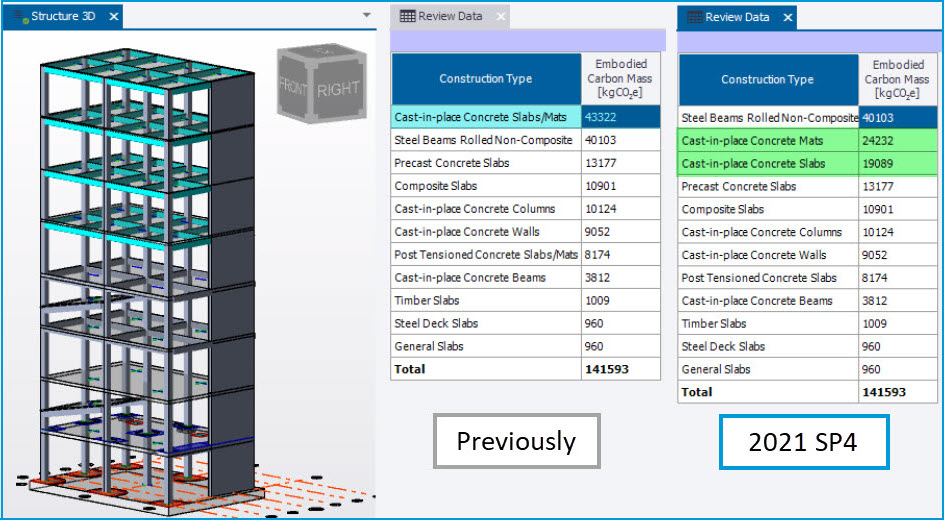 A new automated “Embodied Carbon by Material” chart option has been added to the Charts View as shown in the picture below left. Note the following:

ECFs for Westok sections are revised in this release as follows:

Note that the new value is provided in the new settings file for this release, so for an existing installation you will need to re-import the settings for this value to be updated. The method of doing this is detailed in the 2021 Release Notes for the Embodied Carbon feature here (see the “Existing Installations” bullet point in the section on Embodied Carbon Factors).