Following analysis, the area of steel required for a given panel is determined from the analysis results.

For each panel the basic design check is performed in all areas where no patches exist:

Patches are used during the design of concrete slabs as a way of managing the physical and design data. Each patch defines a rectangular area of slab within which FE analysis results are collected, enabling Tekla Structural Designer to perform the patch design process. Design moments are calculated along result strips, embedded within each patch. Depending on the patch type, a patch can contain up to 6 result strips, catering for up to 3 strips of reinforcement in each of two perpendicular directions.

Punching checks can be requested at any

While you can apply both normal and lightweight (LW) concrete in the slab properties, slab design using lightweight concrete is only available for Eurocodes.

When using other Head Codes slabs can only be designed using normal weight concrete.

Only slabs that have been specified with two-way load decomposition are designed.

One-way load decomposition in Tekla Structural Designer is a simple procedure that does not determine slab design forces. When a slab's decomposition is set as one-way it is assumed that it is some form of precast slab (presumably designed by safe load tables).

It should be noted that any in-situ slab is capable of two-way decomposition:

When a slab panel is specified with two-way decomposition, a general FE based approach is used to determine the design moments. If you have elected to mesh 2-way slabs in the analysis, the 3D Analysis results are also considered:

Prior to running slab design you should review the design settings by selecting Design > Settings > Concrete > Slab.

These settings are used to control:

Any of the four layers can be set to "none" if required.

Patches can be either on the top or the bottom of the slab and may or may not have reinforcement defined in them. If you have not defined any reinforcement, Tekla Structural Designer uses the background reinforcement.

Note that patches may overlap on the plan view, and there is no restriction on this, even patches relating to the same layer of reinforcement are allowed to overlap. This situation is handled conservatively during design by simply ignoring the overlap.

Each patch manages reinforcement and the reinforcement design using a number of slab design strips. Some key points to bear in mind considering patch design are:

For the strip designs within each patch it is necessary to establish which bar layer is to be designed and work out if and how the patch reinforcement combines with the panel reinforcement. 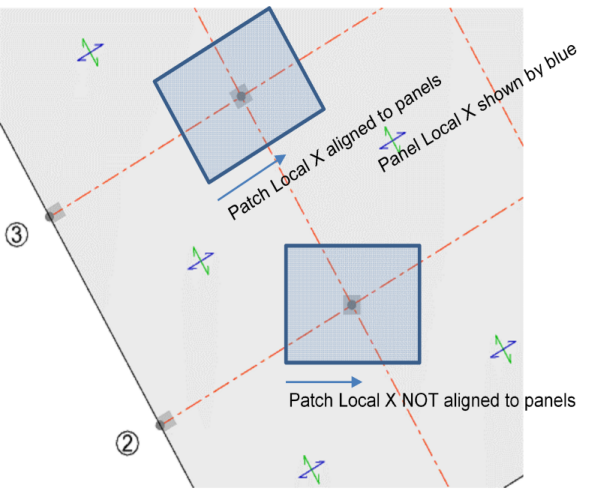 As shown above there are 2 distinct options:

In both cases the reinforcement that is determined for use in the design checks is some combination of the panel and patch reinforcement. Expanding upon this the cases considered are:

Patch NOT aligned to panel:

Patch reinforcement is used in the surface to which the patch applies. Reinforcement in the other surface is taken from the panel using the most aligned possibility.

Patches to both surfaces

As stated above, patch reinforcement is only ever used in the surface to which a patch applies, reinforcement in the other surface is taken from the panel.

In this specific situation, for both patches the other surface doesn't necessarily need to be designed to only consider reinforcement in the panel; you can avoid this by selecting the patch property Consider patch surface moments only.

Only slabs that have been specified with two-way load decomposition are designed.

In order to perform span - effective depth checks for irregular shaped beam and slab panels, they have to be converted to idealized four sided rectangular panels.