If you are updating from a version earlier than Tekla Structural Designer 2018i SP3 (version 18.1.3.43) you can find details of enhancements and fixes included in all previous releases in Tekla User Assistance (TUA) and Tekla Downloads via the links below:

The user interface is given a complete update with new icons and colors producing a clean and simple design aesthetic which is common to all Tekla applications. The ribbon uses flat, monochrome icons to maintain neutrality, allowing the engineer’s focus to be directed at the main workspace area. A new View Gradient background is added (on by default) and a number of Ribbon controls are simplified/ rationalized improving program operation and workflow. 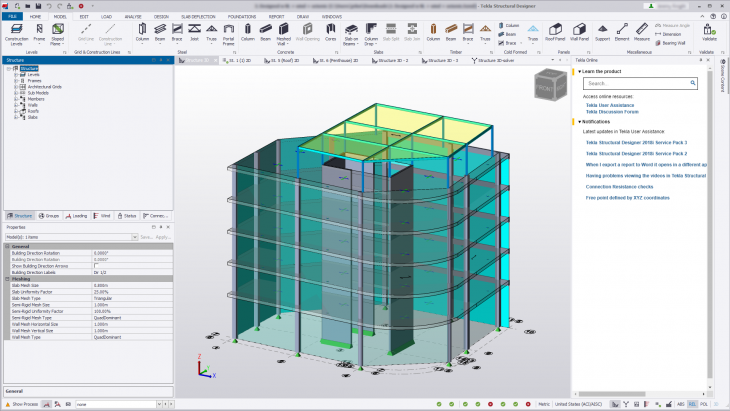 Ribbon commands have been compacted and rationalized to prevent command groups folding up and improve their utility.

Tekla Online Profile Sign In and Online Side Pane

You can now sign in to Structural Designer with your Tekla Online profile. This works in conjunction with the new Tekla Online Panel which is also added to the Interface (docked to and flying out from the tab at the top-right of the window). The Side Pane gives Notifications on updates and recent articles and gives direct access to Online Resources such as Tekla User Assistance (TUA - additional content is available when logged in) 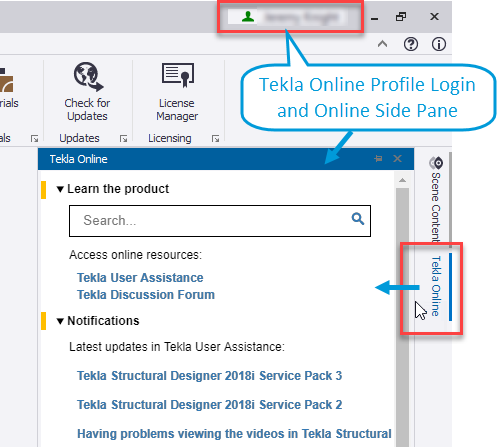 Adobe AIR is replaced with Tekla Online Help (TUA) - as implemented in Tekla Tedds 2018 - giving direct access to the most up-to-date Help Content as well as all TUA content. 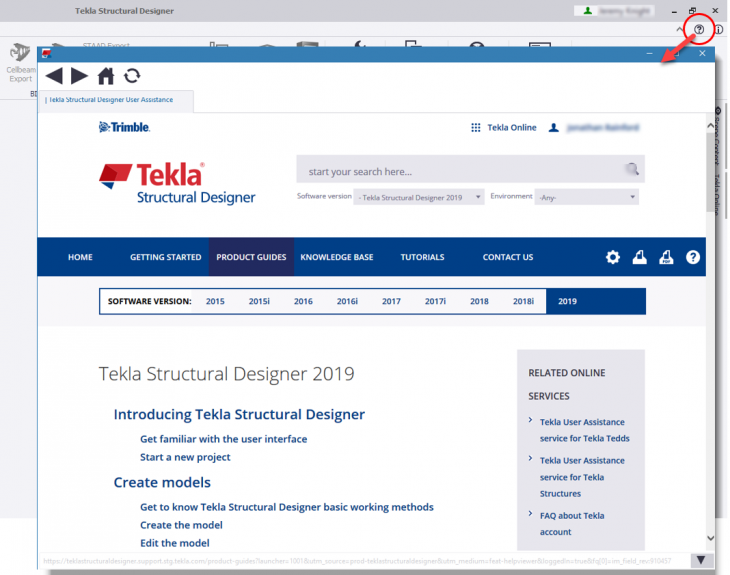 The Support Tool, which has been in use for a number of years for Tekla Structures, is now added to Structural Designer. The Tool makes contacting Support with questions or issues even easier. It automatically uploads your model file and sends this, together with your issue description and key information (needed by Support to assist you) about your installation and system, to your Local Support Team as defined in your Tekla Online Profile. It is launched via a new “Contact Support” command added to the File menu. 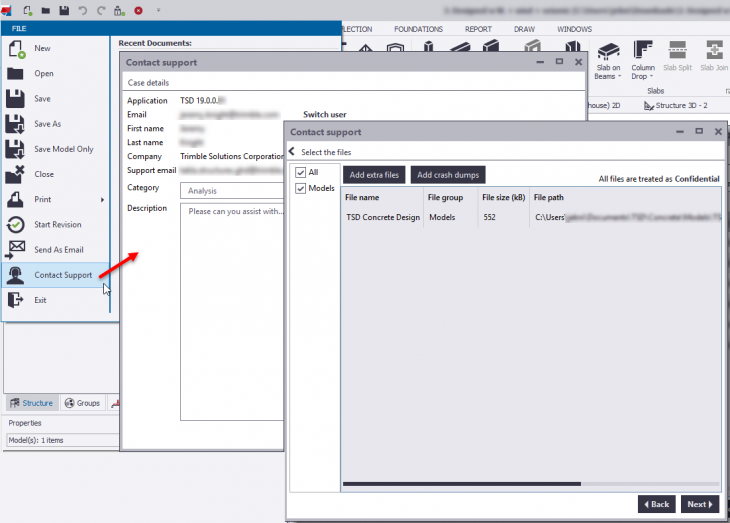 In a major design enhancement a User-defined Utilization Ratio (UR) can now be set for auto-design for practically all materials and objects. This gives the engineer complete control over the level of conservatism they wish to use in their design solution. The user-defined UR can also be > 1.0 allowing engineers to exercise their judgement on the level of failure that can be allowed e.g "within 5% - OK". The new setting can be made via element properties and is also added to the Review View Attributes, enabling rapid graphical review, editing and application. For more, see the new Video on this feature Tekla Structural Designer 2019 User Defined UR; 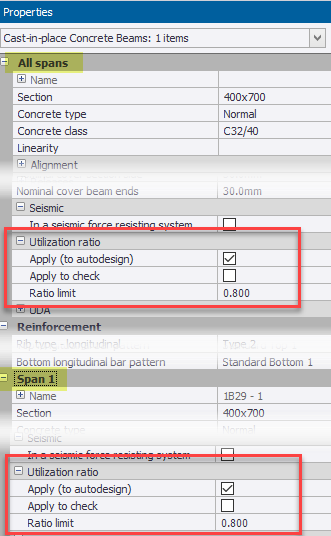 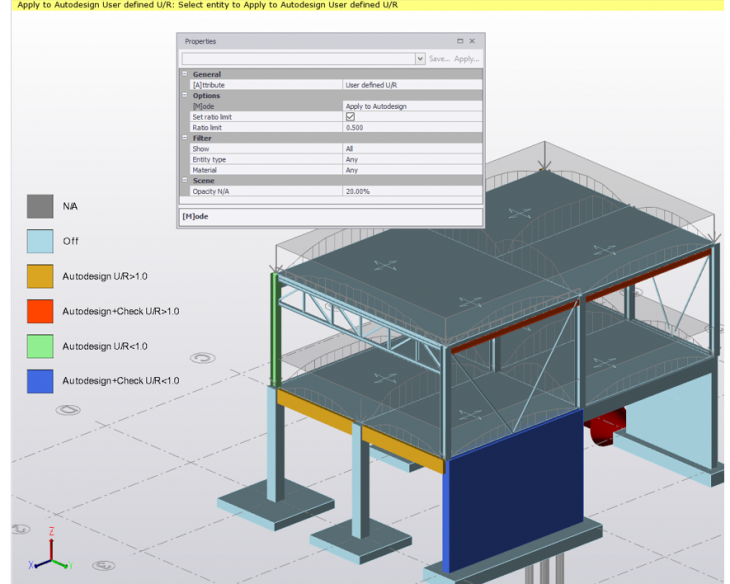 The previous single-layer rebar arrangement for concrete columns could sometimes fail to find a solution - a problem more common in hi-rise structures with large columns in lower stacks. The enhancement of an additional layer is included in autodesign meaning a passing autodesign is now automatically achieved for more situations, and engineers have more flexibility when interactively designing their columns.

Additionally, for rectangular and parallelogram sections and also single layer solutions, the design loop has been enhanced so that a more even distribution of reinforcement is achieved around the perimeter of sections with different edge lengths where previously - most commonly for large rectangular sections - bars could be unevenly concentrated in one set of faces.

The design details output for slabs is also significantly enhanced and is now essentially identical to the existing level of detail for beam design. This applies both to the existing design of Normal weight concrete and the new LW concrete design.

Columns can now be active in two Seismic Force Resisting Systems (SFRS) simultaneously (both Dir1 and Dir2) this being a new feature of the AISC 341-2016 Code.

Following customer requests and for consistency in the design of steel and concrete members to code seismic provisions, concrete columns can also now be set as active in two SFRS’s simultaneously.

The design capability for LWAC concrete is also added to Composite Design to EC4, again for all supported Country National Annexes (NA).

Where the geometry of models is changed, composite beam effective widths can become out of date and potentially invalid. Previously this would need to be rectified manually. To improve operation in this circumstance, a new option is added to enable automatic calculation of effective widths just prior to design. The new setting is found in Design > Settings > Composite Beams, as shown in the picture below and is Off as default.

The Stud Auto-layout process which is run during during both autodesign and check-design when the Auto-layout property is checked on, is improved to produced a more economic and/ or practical solution for a wider range of cases, for both parallel and perpendicular span direction composite beams.

Improving both flexibility and transparency, with new controls the engineer can now specify the proportion of load to be used in the Natural Frequency check and the factor for increased dynamic stiffness of the concrete flange, where previously these values were hardcoded.

In Review View > Show/Alter State a new option is added for “Quick Connector Layout”. This allows the engineer to easily copy the Connector Layout from one beam to another. This is particularly useful for perpendicular span direction beams in which the layout option (i.e. number/ spacing in ribs) is considered, rather than stud spacing dimension, allowing the stud layout to be copied to members of different lengths and with different metal decks.

Steel Joist Design is updated to the SJI 44th Edition (from 43rd) and improved design results make the origin of the Design load clearer.

In a long-standing Steel Design efficiency feature, for both beams and braces Structural Designer automatically performs a connection capacity check when the Connection Resistance Database is populated with section and connection type capacity data, enabling the engineer to rapidly assess if a particular section is suitable. Results of the check are then reported in Review View > Tabular Data > Connection Resistance. In previous releases it was not possible to discriminate between connections specifically for braces and those for beams, and thus inappropriate checks could be undertaken. The Connection Resistance Database controls are now enhanced enabling the engineer to control whether a particular connection type applies to beams and/ or braces to improve the check results and prevent this.

The steel design scope is expanded to include Angles, Double Angles and Tee sections in bending. Many sections of these types are Class 4 (slender) sections. This is now catered for in the design of Angles and Double Angles.

[TSD-514, 2247]1 in previous releases there could be inconsistency between the partial safety factors defined in design combinations and those applied to self-weight and additional foundation surcharges in design checks. This could result in over-conservative design for some combinations, or unconservative design where the additional forces acted as stabilizing loads, although it is thought the latter would be a more rare occurrence. The inconsistency is now removed and new controls added allowing the engineer to assign each of the additional surcharges to their respective load case.

The following significant enhancements are made to the design of Pad Base footings bringing the design scope and process in line with that of the US and Eurocodes:

Both Graphical and Tabular Wind Drift Check results are significantly enhanced to improve review and output:

With a comprehensive new feature, Concrete Cores can now be defined for which overall analysis results are automatically calculated and reported for review and output. The engineer has complete flexibility in assigning any concrete structural object (of Walls, Columns and Beams) and any number of these to a core. There is no effect on existing models or designs when using this new feature. The new features extends across all of; Modeling and Interface; Results & Reactions; Reports and Output. See the new Video on this feature Tekla Structural Designer 2019 Concrete Cores; 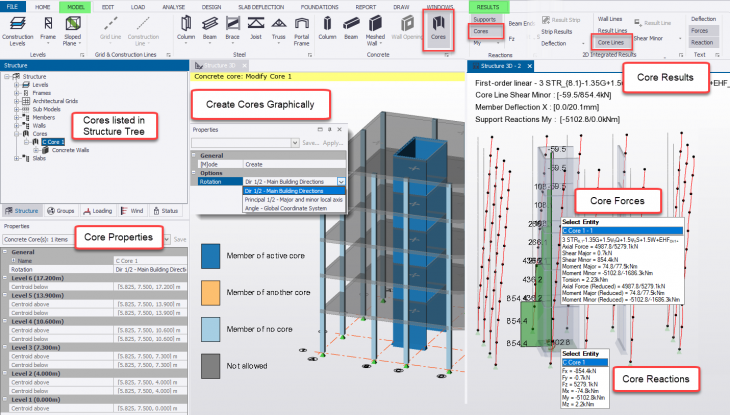 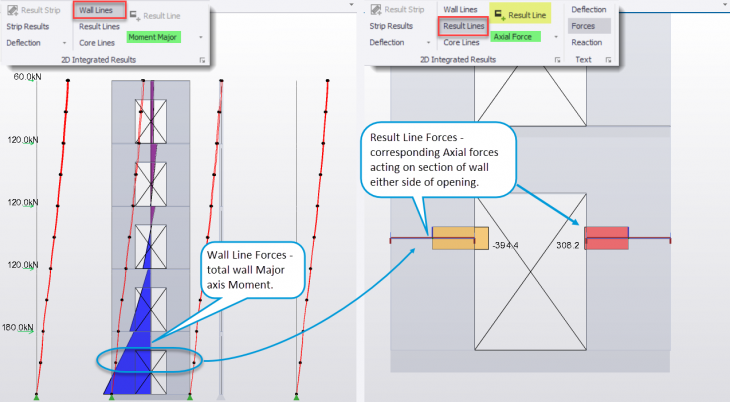 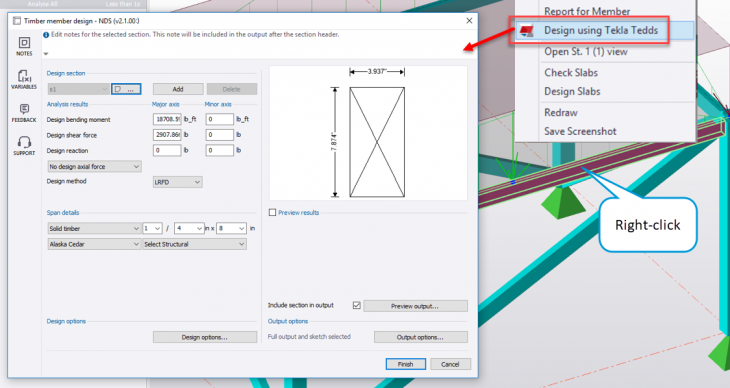 New options are added to the export of Analysis Results for export to both Tekla Structures and Revit; chase-downs can now be selected for the Analysis method and an existing Model filter can be applied (this applies only to Analysis results, not other export objects/ aspects of the model). This can speed up the export/ import process by restricting the amount of information in the export file.

1 This number is an internal reference number and can be quoted to your local Support Department should further information on an item be required.