When should I use the "Mesh 2-way Slabs in 3D analysis" option?

In Tekla Structural Designer you have the option to mesh 2-way slabs in the 3D analysis.  As a default this option is not selected and typically we do not encourage it. 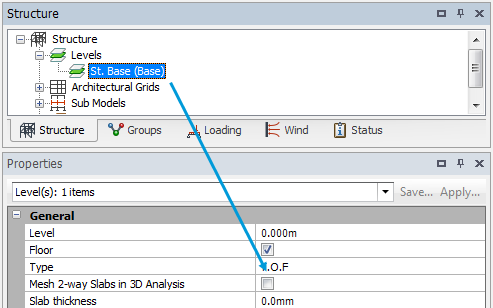 So the discussion here is about:

Structural engineers have not traditionally created large FE models of entire buildings, the ability to do this is a relatively recent phenomenon. Traditionally engineers analysed one floor at a time, or even one continuous beam at a time.  This traditional approach is catered for by the Grillage and FE Chasedowns.


When should slabs be meshed in 3D analysis?


Bear in mind that meshing can be applied selectively to floors/planes, e.g. if you need to mesh level 3 because it is a transfer level, then every other level does not need meshing.

Since it is possible, why would you not just do it all the time?

Because you can get results that are very different to traditional expectations.  This occurs because the slabs start sharing load with beams:


Examples of meshing floors for the wrong reasons