Mechanisms are stability problems in the model which must be addressed and we advise should not be ignored.  More information related to mechanisms can be found in the related (N-1) rule article. The N-1 rule must be followed when modelling to avoid these warnings.

Mechanisms can be classed into two main types:

Examples of Local mechanisms are:

Examples of Global mechanisms are:

Mechanisms will be flagged by Warnings listing affected nodes in the Status Tree > Solver group - as shown in the picture below.  They will commonly be accompanied by additional warnings for excessive deflections.  To locate the affected nodes; activate the Solver view then double-click a warning or group of warnings.

When double-clicking on a Mechanism warning, the most affected node will be highlighted with a blue arrow as shown below; often this is the single node the stability of which needs addressing, however sometimes it is just the most affected or first encountered during solution and further investigation is required (i.e. deflections or visual interrogation of the releases via Review view) 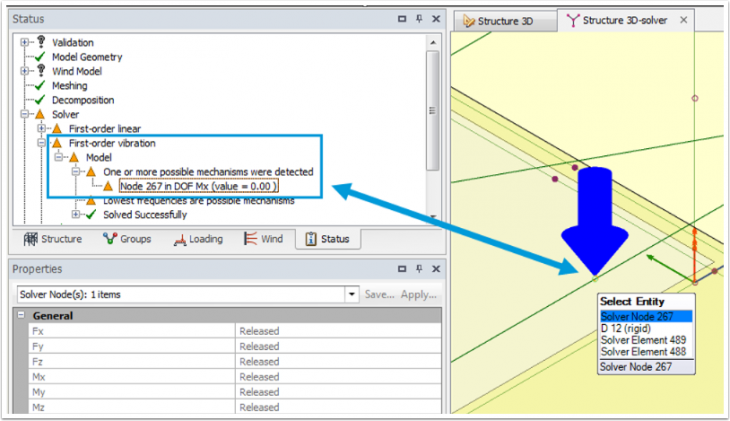 Turning on Members>Direction for the Structure view Scene Content shows a pink arrow next to each member, pointing from End 1 to End 2, as shown above. 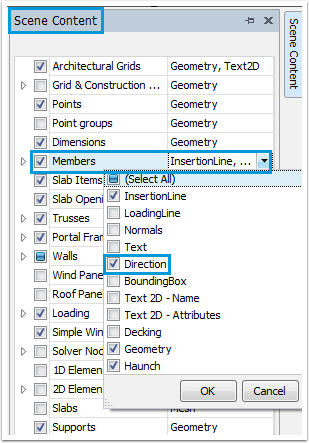 Releases can also be changed using the Fixed/Pinned review tool in the Review view.

Note that this tool will only allow you to toggle between Fixed, Pinned, and Moment releases with the Fixed/Pinned Attribute set.  A Free (cantilever) end can also be set using the "Cantilever End" Attribute as described in the Tekla Structural Designer 2019i SP2 Release notes here (General & Modeling section). 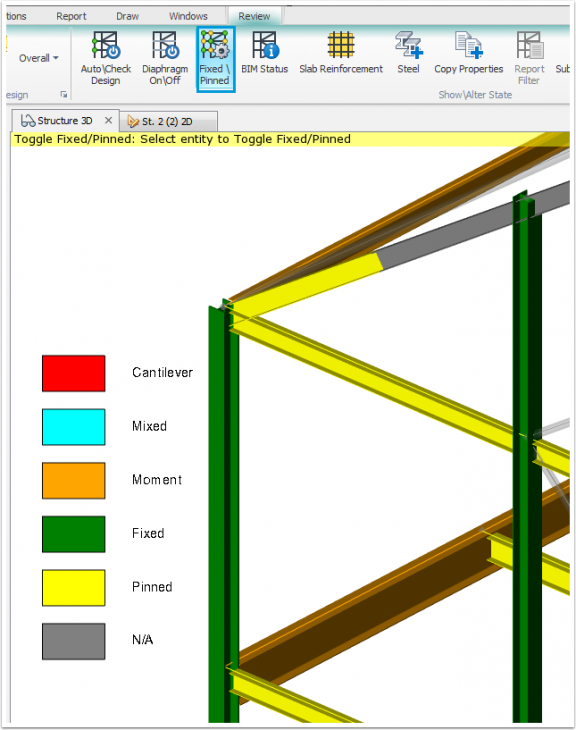 Turning on 1D Elements>Releases for the Solver view Scene Content is useful for viewing the releases applied graphically. 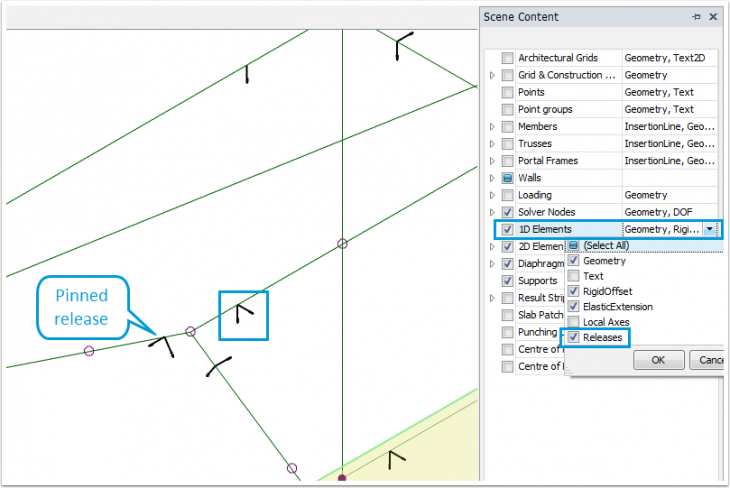 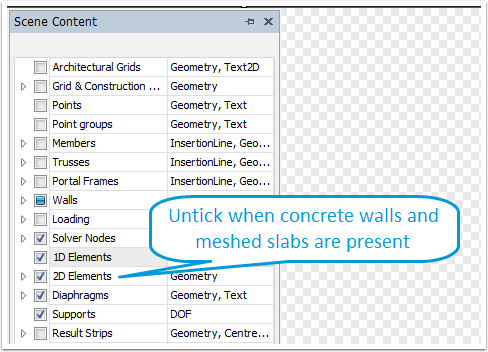 Redundant releases
Sometimes Tekla Structural Designer will point to the middle of a member, this means that there are redundant releases at one or both of the supports of that member.

Cantilever beams
Cantilever beams must be set as Cantilever end ("Free end" in earlier versions) on the cantilever side, regardless of whether they have another member connected to them or not. Bear in mind that Composite beams cannot currently be set as cantilevers (since they cannot be designed for hogging moments) hence set cantilevers to non-composite.

Also note that two cantilever end releases cannot be connected so only one of the two members must be set as cantilever.

Mechanisms can often be located by running a 1st order vibration analysis.  Mechanisms will present as modes which have a frequency of zero.  This is because a mechanism by its very nature has zero stiffness and hence can displace indefinitely in one or more DOF's.  Frequency is fundamentally related to stiffness and mass - in fact to sqrt(k/M) where k = stiffness and M = mass.  So when k = 0, you have frequency f = sqrt(0/M) = 0.

To carry out a Vibration analysis, create a Modal Mass combination - we recommend you include the gravity cases in this combination.

This can be a faster analysis and can help you to locate some mechanisms.  Animate the modes with frequency of zero and they can be apparent e.g. a cantilever with a pinned root will 'flap' up and down or side to side (*note that this will not be the case with a local mechanism however since the mode shape cannot represent nodes or members spinning).

Running vibration analysis is not a 'panacea' however for finding mechanisms - if mechanisms are too severe or extensive it may simply fail to solve.

Providing it runs, once the process of finding and resolving mechanisms using vibration analysis is complete, 1st order linear can then be run to find further possible mechanisms.

Once Vibration Mass and 1st order vibration analysis yield no mechanisms you can run 1st order non-linear analysis and resolve any further mechanisms found, if any.

We recommend that close attention is paid to the nature of the mechanisms. This may help you in resolving a number of them before re-running analysis. For example, if Tekla Structural Designer prompts that mechanisms are found on pinned beams connecting to pinned columns (redundant releases) then there is a chance that this scenario will be repeated in other areas. By using the above advice, you can spot redundant releases by navigating through the model.

The above process should be performed iteratively until the analysis solves to a green tick mark.